How to Write a Movie Review to Make Anyone Watch It

The movie review is created to help the reader to draw a conclusion: is the movie worth time, or is it better to watch something else. The main thing is that the author’s opinion should be independent. The movie review serves a great role in analyzing the movie, as trailer gives only a brief idea. After all, trailers are trying to show the brightest moments of the film, the best special effects, exciting moments. And the author shows an independent opinion and gives a more accurate point of view.

The Purpose of Movie Review

Preparing for the Review

In order to write a qualitative review, you should start it right after watching the movie. It will be possible to disclose information better and more accurately. Of course, the impression of watching a movie in cinema differs from the “screen”. If you want to make a professional review, a poor-quality should be completely eliminated.

Bring a notebook to the cinema. Right after the movie show has finished, write down the brightest moments and the most impressing scenes. When you come home, you should come up with a headline. Of course, it’s very easy to name the article “Review of the movie…” However, in this case there are no guarantees that your work will be interesting to someone. You should come up with something extravagant and memorable.

Gather available information about the movie. This step may be conducted both before and after watching. Decide what information will be suitable in your review. You will surely need to mention the fil title, year, director’s name, main actor’s names, genre.

Read recommendations for writing the review, the word limits and specific format. Mention the deadline and make sure that you are ready to meet all requirements. Also determine the perspective of your review, will it be descriptive or critical? On what points you should pay attention?

Questions to Ask Yourself Before Writing

Start your review with an opinion or fact about the movie. There are three varieties of first sentence: comparison to relevant movie, review in a nutshell or reveling background information.

After the intriguing first sentence, you need an equally intriguing beginning. The introduction should briefly reflect the idea of ​​the film. You can also write the main line of the story or, for example, list the names of the actors, write in which pictures they were shot before. In addition, one should avoid all boring retelling.
State your opinion about the movie early, it will set the tone of the whole review and reader will not wonder about your opinion. After reading 2-3 sentences, the reader should have a desire to continue reading. By the way, 2-4 sentences are quite enough for average introduction. As a rule, these general phrases prepare the ground for further narration. For example: “Pixar once again confirmed its status as a producer of family cartoons with a deep philosophical meaning. This year saw the release of the full-length animated film “The Puzzle”. Directors Pete Docter and Ronaldo del Carmen gave us the opportunity to look into the inner world of our children.”

The plot should be described very briefly, revealing the key points and the main twists and turns in the film. Describe exactly so much that there was a general superficial idea of the film, and there was no desire to see it.
Of course, you do not need to describe the whole story, but still its components should be known:

Of course, if the film is bad, then the plot can be painted in little detail. But then you should pay more attention to analysis.

Analysis of the film

Here you need to describe the work of the actors, how they coped with the task, and what, in fact, what tasks they are coping with. Analyze the plot, to reveal the presence of weak and strong points. How much fully it is disclosed, its interest and originality. Affect the work of the director: the production and submission of material, whether he managed to convey the main idea. If possible, describe the operator’s work, scenery, special effects, etc. Make a conclusion about whether the main idea is realized. Write down the highlights that you liked the most.

Your own impression of the film

Personal opinion of the author reviews about the movie. It should be less objective and based on the analysis done above. Express a general impression of the film, but in any case, do not give a personal evaluation.

In conclusion, we need to draw conclusions and summarize our assessment of the film. Designate what the viewer will receive after viewing this picture. Will it be positive emotions? Will the viewer learn anything, or just have fun? If it is possible to give recommendations, tell is it worth watching this film, and for which audience it is more suitable.

Once you have finished the review, take a little rest and start reading it. You may need to cut sentences, shift paragraphs or add more information in place where you insufficiently uncovered the idea. Ask yourself, if the movie is described enough and readers will understand what the movie is about.
Make sure that you have followed the right format, spelled actors’ names correctly and your text is clear from mistakes. Also check your text for readability and voice tone, all your sentences should flow from one to another.

Phrases and Words to Use in Review

If you have troubles with choosing the right words or have no idea how to start sentences in your review, these samples may help you. 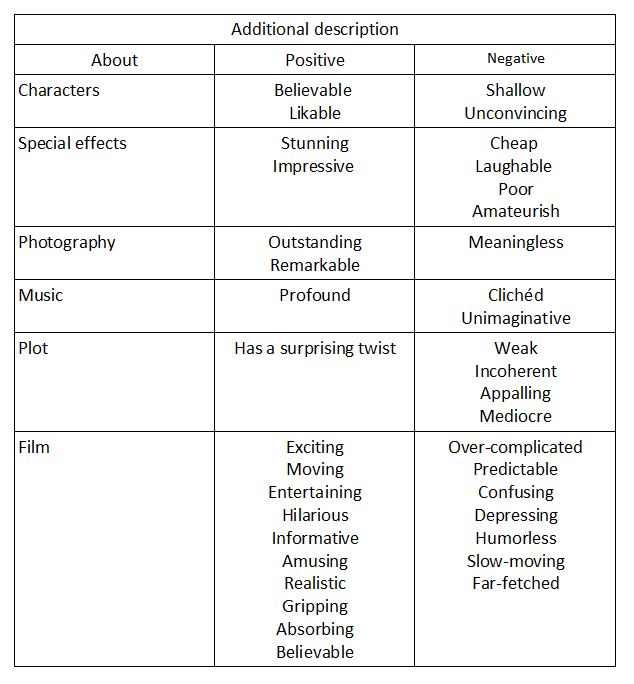 Take into consideration that if you do not like the movie, there is no need to express negative emotions about it. A good reviewer will guide the readers through the essence of movie and make a little hint if the movie worth watching. To write a great movie review, read as much reviews as you can, analyze the writers style and information blocks. Give yourself enough time, and you will surely succeed!

You can also look through movie review examples, which were written by our writers to get some ideas for your own writing.