Home > Blog > Example of Essay on Photography
Posted on August 13, 2014 by EssayShark

Example of Essay on Photography

Is Photography a Reflection of Reality or an Escape from It?

Photography, meaning “drawing with lights” in Greek, is an art as well as a science of capturing light and storing it in some medium. Photographs have been used for over a century now for capturing moments of mankind and the environment, even though photography dates back to the 4th century B.C. But since its use, questions arise of whether photography can reflect the truth, the reality, or instead push us away from it. Photography is just another art where an artist puts his or her thoughts and imagination on a canvas using creativity. Hence, photography may not show what the reality is but how the photographer sees the world or wants us to see the world.

Some people argue that photography involves mechanical processes that handle most of the work, so not much work is to be done by the photographer. Whatever is present in front of the lens is captured exactly onto the film or medium, and there is no scope for the image generated to show others than the reality presented at that moment. But what matters is how that photograph was taken. The lights, the colors, the angle of the photography, and the frame captured create a story of their own. The photographer uses such aspects to create an interpretation of reality, how they see it and not necessarily how it appears to everyone else also present at that moment. 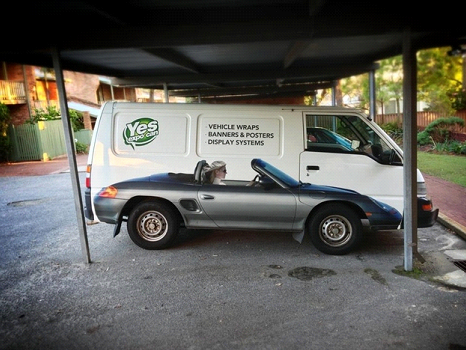 For instance, a photograph of a beautiful beach will not show the litter present behind the camera. The viewer will admire the beauty of the beach but will never know the reality of the beach. This will instill a false belief about that beach into the mind of the person who sees the photograph, and they may never know the truth about it. Photographers do not always want people to see the truth but the beauty of their work. It may seem morally incorrect, but it is what they are supposed to do: take beautiful photographs and earn admiration for the same. But photographs, even used for recreational purposes, can be misleading sometimes. Consider the image below. It takes a while to see the truth. It appears there is a convertible parked next to the van, but in reality, it is just a car painted on the van, and there is no convertible.

However, more serious issues arise when photographs are used to show real events and are even sometimes used as evidence in the court of law. After the invention of personal computers, photographs can be easily manipulated even if they are already taken. Which in turn can be considered bending the truth or simply a lie. There have been many incidents in the past where photographs have been faked or misinterpreted, creating havoc. The best-known example is Reutersgate, which involved digitally manipulated photographs taken by Adnan Hajj, a freelance photographer who had worked for Reuters. 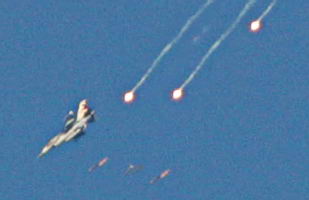 One of the photographs, captioned by Reuters as showing an Israeli F-16 fighter jet firing ground attack missiles during an airstrike on Nabatieh, was digitally manipulated to show as if the F-16 was firing missiles, but it actually deployed a single flare.

Many simpler attempts were also made by just giving false or misleading captions to otherwise real photographs that were taken at different times or places and used during the Lebanon war period. Consider the images below. The first image was captioned “Journalists are shown by a Hizbollah guerrilla group the damage caused by Israeli attacks on a Hizbollah stronghold in southern Beirut, July 24, 2006 (Adnan Hajj/Reuters).” However, the next photo is captioned “A Lebanese woman looks at the sky as she walks past a building flattened during an overnight Israeli air raid on Beirut’s suburbs August 5, 2006 (Adnan Hajj/Reuters).” A cursory glance shows that it is the same destroyed buildings in both photos. If they were already destroyed on July 24, they could not have been destroyed on August 5, especially since the damage is identical in both pictures. It is quite obvious that photos of the same scene were re-released to make it appear as if Israeli bombing raids were continuously hitting Beirut, when in fact Reuters was just recycling the same damage over and over. Well, it is ironic how one image disproves another image. 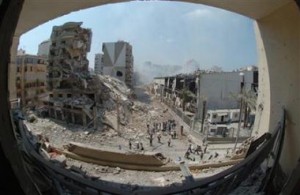 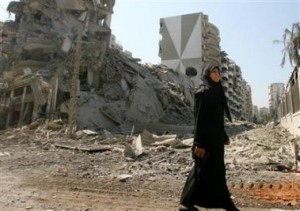 This provokes the question of whether we should believe what we see or not. I think that we should verify a photo before we jump to conclusions whenever it is necessary and possible. Photographs can be a great source of entertainment and a form of art, but when it comes to portraying reality, it may not succeed in depicting the truth. Sometimes photographs can also create a sort of hyper-reality, which exaggerates the reality and thus cannot be considered the truth. Photography acts as a thin line between reality and fantasy. The format shows what you want to see.

Like this sample?
Get an essay like this only for $16.70/page
Order similar paper now
You can choose our example of essay to write your own paper. In order to write an effective essay, look through our samples on our site. If you like our example of essay, our writer can complete a similar paper for you. You can rely on use, as our professional essay writers have experience and knowledge in academic writing. You can contact us any time you want because we are available 24/7. There is no such topic our writers can’t deal with. Tell us your requirements, set the deadline, and we will complete your order as fast as possible.

Main photo by Engin_Akyurt from Pixabay